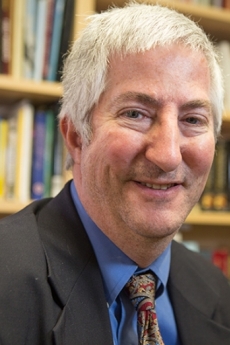 Professor of Classical and Ancient Near Eastern Studies and of Anthropology; Director of the GWU Capitol Archaeological Institute

Dr. Eric H. Cline is Professor of Classical and Ancient Near Eastern Studies and Anthropology, the former Chair of the Department of Classical and Near Eastern Languages and Civilizations, and the current Director of the GWU Capitol Archaeological Institute. He is a National Geographic Explorer, a Fulbright scholar, an NEH Public Scholar, a Getty scholar, and an award-winning teacher and author. In May 2015, he was awarded an honorary doctoral degree (honoris causa) from Muhlenberg College.

An archaeologist and ancient historian by training, Dr. Cline’s primary fields of study are biblical archaeology, the military history of the Mediterranean world from antiquity to present, and the international connections between Greece, Egypt, and the Near East during the Late Bronze Age (1700-1100 BCE). He is an experienced and active field archaeologist, with more than 30 seasons of excavation and survey to his credit since 1980 in Israel, Egypt, Jordan, Cyprus, Greece, Crete, and the United States.

Dr. Cline is currently Co-Director of the renewed series of archaeological excavations at the site of Tel Kabri, also located in Israel, which began in 2005. The project is run by the University of Haifa and The George Washington University (Assaf Yasur-Landau and Eric H. Cline). He was also a member of the Megiddo Expedition, in Israel, excavating at biblical Armageddon for ten seasons over a twenty-year period, from 1994 to 2014. He began as a volunteer and rose up through the ranks, ultimately serving as Co-Director with Israel Finkelstein and Director of the Consortium until stepping down in 2015.

A prolific researcher and author with twenty books and more than 130 articles and book reviews to his credit, Dr. Cline is perhaps best known for writing books such as Sailing the Wine-Dark Sea: International Trade and the Late Bronze Age Aegean (1994, republished in 2009); The Battles of Armageddon: Megiddo and the Jezreel Valley from the Bronze Age to the Nuclear Age (2000); Jerusalem Besieged: From Ancient Canaan to Modern Israel (2004); From Eden to Exile: Unraveling Mysteries of the Bible (2007; republished as a Kindle edition with a new Afterword in 2012); Biblical Archaeology: A Very Short Introduction (2009); The Trojan War: A Very Short Introduction (2013); 1177 BC: The Year Civilization Collapsed (2014); Three Stones Make a Wall: The Story of Archaeology (2017); and, most recently, Digging Up Armageddon: The Search for the Lost City of Solomon (2020).

In addition, he edited the handbook entitled The Oxford Handbook of the Bronze Age Aegean (2010); co-authored Ancient Empires and The Ahhiyawa Texts, both of which appeared in 2011; co-edited a volume entitled Ramesses III (2012); and The Social Archaeology of the Levant (2019). He has also previously published co-edited volumes on Amenhotep III (1998) and Thutmose III (2006), as well as a conference volume, The Aegean and the Orient in the Second Millennium (1998).

In addition, he has recorded an introductory course on archaeology which was released in June 2016 by The Teaching Company/Great Courses, entitled Archaeology: An Introduction to the World's Greatest Sites, as well as three courses for Modern Scholar/Recorded Books which are now available as downloads through Audible.com: A History of Ancient Israel: From the Patriarchs Through the Romans (March 2007); A History of Ancient Greece: From the Bronze Age through the Hellenistic Age (March 2007); and Archaeology and the Iliad: The Trojan War in Homer and History (January 2006).

He also received acclaim for his 2007 op-ed in the Boston Globe, a diatribe against pseudo-archaeology, which was republished numerous places, including online by Archaeology magazine. Read the original here.

Professor Cline is currently the Co-Editor of the Bulletin of the American Society of Overseas Research (ASOR), along with Professor Chris Rollston. He has previously served the American Society of Overseas Research (ASOR) as an elected member of the Board of Trustees and as Vice-President and member of the Executive Committee, the Nominating Committee, and the Committee on Archaeology Policy; Chair of the Annual Meetings and Program Committee (CAMP), a member of the Personnel Committee and the Program Committee, and an ex-officio member of the Executive, Program, Outreach, Lectures, Honors/Awards, Regional Societies, Implementation and Strategic Planning, Development, and Unprovenanced Texts Committees. He has also served as an elected Society Trustee of the Archaeological Institute of America (AIA) and most recently served on the Excellence in Undergraduate Teaching Award Selection Committee; he is currently on the national Lecture Program Committee and the Near Eastern Archaeology Interest Group, and is active in the local Washington DC AIA Society.

He has presented more than 300 scholarly and public lectures and presentations on his work to a wide variety of audiences both nationally and internationally, including at the Smithsonian Institution in Washington, DC, the Metropolitan Museum of Art in New York, and the Skirball Museum in Los Angeles. His research has been featured in the Washington Post, the New York Times, US News & World Report, USA Today, National Geographic News, CNN, the London Daily Telegraph, the London Mirror, the Brisbane Courier-Mail, the Cincinnati Enquirer, the Cincinnati Post, and the Associated Press, with all of those articles subsequently reproduced in numerous other periodicals within the United States and abroad. His books have been reviewed in the Times Literary Supplement, the Times Higher Education Supplement, the Jerusalem Post, the Cincinnati Enquirer, the History News Network, Jewish Book World, and many professional journals, while his publications overall have been cited over 2,100 times in more than 400 scholarly books and articles since 1987.

He has also appeared in more than twenty television programs and documentaries, ranging from ABC (including Nightline and Good Morning America) to the BBC and the National Geographic, History, and Discovery Channels. He has also been interviewed by syndicated national and international television and radio hosts including Robin Roberts and George Stephanopoulos on ABC's "Good Morning America," Bill Hemmer and Martha MacCallum on Fox New Channel's "America's Newsroom," Fergus Nicoll on the BBC World Service/The World Today, Kojo Nnamdi on NPR’s “Public Interest” show, Michael Dresser on “The Michael Dresser” show, and Richard Sheehe on WRGW.

In July 2020, Professor Cline was named a Getty scholar for the 2020-21 year, but will take up the fellowship in Fall 2021. In July 2015, Professor Cline was named a member of the inaugural class of NEH Public Scholars, receiving the award for his book project entitled Digging Up Armageddon: The Search for the Lost City of Solomon, which has just been published by Princeton University Press. Two months earlier, in May 2015, he was awarded an honorary doctoral degree (honoris causa) from Muhlenberg College. He also won the national "Excellence in Undergraduate Teaching Award" from the Archaeological Institute of America in 2005 and a Service Award from the American Society of Overseas Research (ASOR) in 2016.

At GW, Professor Cline has won the Oscar and Shoshana Trachtenberg Prize for Teaching Excellence (2012) as well as the Oscar and Shoshana Trachtenberg Prize for Faculty Scholarship (2011); he is the first faculty member at GW to have won both awards. In addition, previously he won the GW Award for Excellence in Undergraduate Departmental Advising in 2006; the GW Morton A. Bender Teaching Award in 2004; and has been nominated three times for US CASE Professor of the Year (2008, 2009, and 2012).

In 2018, his book Three Stones Make a Wall: The Story of Archaeology received the “Nancy Lapp Best Popular Book Award from the American Society of Overseas Research (ASOR). In 2014, his book 1177 BC: The Year Civilization Collapsed received the same award and was also submitted for consideration for a Pulitzer Prize (although it did not win). In 2019, his co-edited volume The Social Archaeology of the Levant won the “G. Ernest Wright Award” from the American Society of Overseas Research (ASOR). Three of his previous books have won the Biblical Archaeology Society's "Best Popular Book on Archaeology" award (2001, 2009, and 2011). His books have also been featured as a Main Selection of the Natural Science Book Club, a Main Selection of the Discovery Channel Book Club, a USA Today 'Books for Your Brain' Selection, and selected by the AAUP for Public and Secondary School Libraries.

Dr. Cline currently teaches a wide variety of courses, including History of Ancient Greece; History of Egypt and the Ancient Near East; History of Ancient Israel; Introduction to Archaeology; Archaeology of Israel and Neighboring Lands; Art and Archaeology of the Aegean Bronze Age; Rise of Old World Cities and States; Seven Wonders of the Ancient World; and various smaller Honors and Freshmen Seminars on topics such as History and Homer, Troy and the Trojan War, the Dead Sea Scrolls, Jerusalem through the Ages, and Archaeology, Politics, and Nationalism.

He has also served as the advisor to the undergraduate archaeology majors at GW for the past decade and has overseen the graduation of more than 160 majors since 2001, with nearly half going on to leading graduate schools in archaeology and related fields, including Harvard, Yale, Cornell, Johns Hopkins, Berkeley, Oxford, Cambridge, and University College London.